For dinner we went out to a Yakiniku (Korean BBQ) place, the same we had been on our last trip. The evening initially started with quite a bummer as we had to witness some stupid car driver hitting a cat, in a way that she was not dead right away, she was flopping around quite some, and Shinsuke ran to pick her up and put her at least off the street, but there was not much else we could do. It appears to have been a stray cat, at least in her last minutes she received some human compassion.

On with the dinner. We had a nice table and to our surprise they even had a similar attachable highchair as we have and Julius behaved very well for most of the time and was just fascinated watching us burning pieces of meat and veggies into a crisp or a piece of charcoal and then dip it in several sauces or lemon juice and eat it. 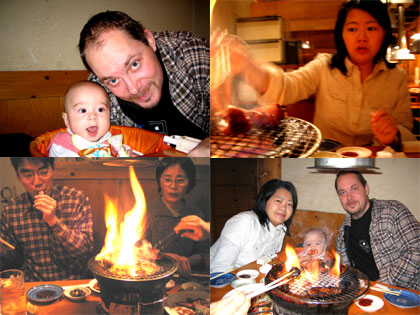 We had 3 different kinds of meat: The first was tongue, which was delicious with the lemon squeeze, then a platter of what was supposed to be the best beef, nicely marbled with fat, but so much that the BBQ pot was quickly on fire, it also turned out to be quite chewy and Ritsu’s mom returned it for a better selection. What came then was indeed a better cut. But having learnt that lesson the 3rd platter we ordered was of a cheaper variety and equally yummy. We also had some Kim-Chi, some veggies to grill, a korean rice dish at the end and some soup. Julius got a bit antsy towards the end, so Grandma and I took turns walking around with him. On the walk back home he fell asleep on my chest.

This entry was posted in Food, Japan, Julius, Travel. Bookmark the permalink.