Blast from the past: Carmen @ Theater Lüneburg 1992

Last night’s performance here at that Hanoi Opera House brought back old memories and I started digging for old photos.

Back in 1992, after just finishing my apprenticeship, I moved to Lüneburg (the first of many more moves to come) and found myself with not much else to do, besides working 8-6.

On my way to work I would always pass the local theater and that became a nice, affordable and fun entertainment hang out. They showed ‘Little shop of Horrors’ which I enjoyed several times. And then I found an ad in the local paper, that the theater is looking for ‘extras’ for their upcoming production of ‘Carmen’ … so, I called, I visited and one of the first questions was ‘By any chance, can you sing?’, because they needed singing extras more than just extras, and this is how I became a member of the chorus there and many happy and diverse productions followed (Il Trovatore, Gräfin Mariza, Evita, something with ‘Stone of Truth’ in the title).

The theater became my second home and I spend many a night in the downstairs cafeteria between the chorus’ appearances (or even on nights when we did not have to work). 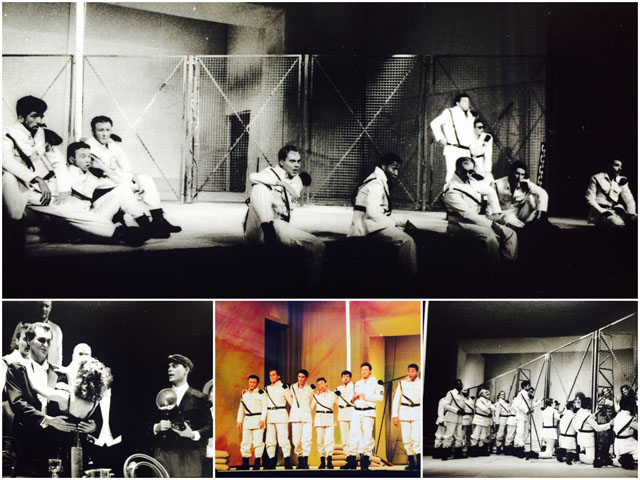 Having these photos is pretty special, this was before digital photography everywhere and there were pretty tough rules, only the officially appointed theater photographer was permitted to take photos of the dress rehearsal (for promotional purposes) and he would sell copies at a steep price. The color pic must be one of the few spy pics that exists (taking pictures during performance would result in a kick-out, while yesterday I witnessed everyone happily snapping away with their phones, times change … )

This entry was posted in General. Bookmark the permalink.